skip to main | skip to sidebar

Since my father is home, I have an extra pair of hands to help repair the garage door.
First, we replaced the beam that support one of the rails. I guess the wire got caught against something and rip apart the wooden beam.

Here's a picture of what it looks like after we replaced the beam. 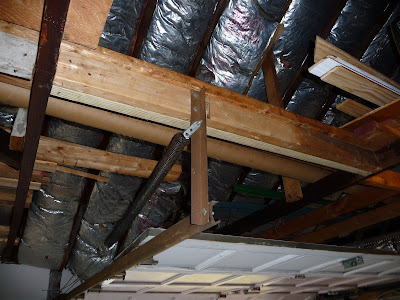 We didn't have any clamps for the wires so we looped it around itself. That's not a big deal as long as the safety cable was secured, which it has not. 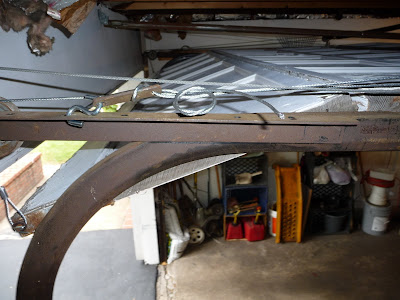 I pressed the opener to see if the door will now open but the chain wouldn't move. We removed the garage opener cover discovered two broken pieces. Those pieces held the casing for the gears together. I didn't feel like buying a new garage opener when it's not on sale so we used 2 metal wires to tie them back together. To our surprise, it works! Sure the machine makes an uncomfortable noise when you use it, but this gives me time to shop for a new opener. 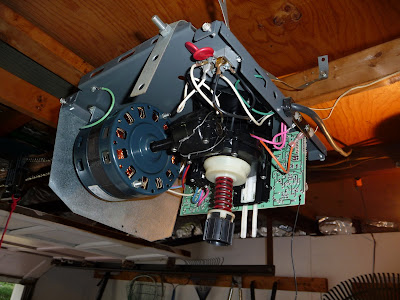 I Met The Funny Man

I was stoked when I learned Dave Barry will be a guest speaker at the conference I'm attending. I missed most of his speech because of work, but I did get a picture with him! 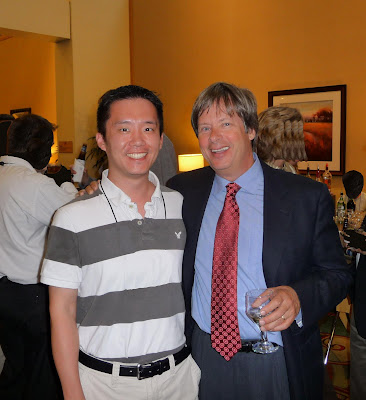 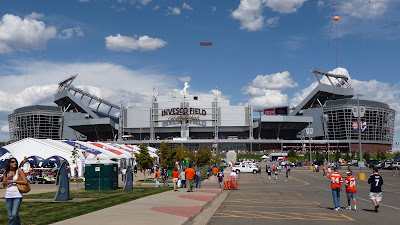 Yesterday, I enjoyed a delicious lunch at Invesco Field in Denver, Colorado. I ate buffalo sausage, cheddar jap brat, and a hot pickle. They abbreviate jalapeño with jap... 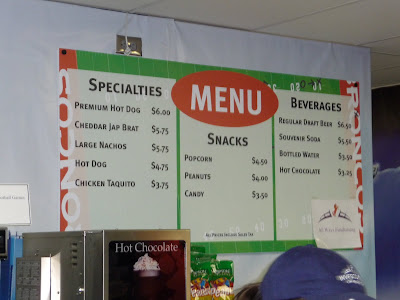 Unfortunately, I snarfed down the food before I remembered to take their picture.

After lunch, I figured I stay and watch the Broncos vs Browns game. This was their home opener and the show started with a retired player, Shannon Sharpe, being inducted into their Ring of Fame.
He and a few others parachuted into the stadium. All the jumpers before him came down fast and pulled up 200 feet above the ground. I thought someone will crash so I filmed what I can with my digital camera. **Everyone landed safely**

A huge flag was unrolled during the national anthem. As the anthem finished, 4 fighter jets flew above the stadium. 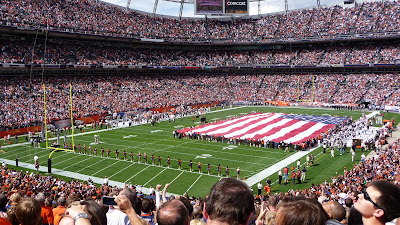 This was the most elaborate opening I have seen at a football game. 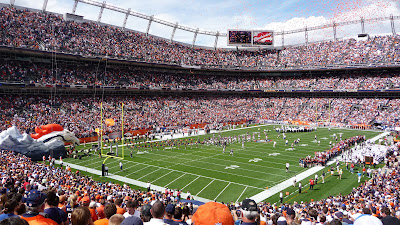 It was an intense game. The Cleveland Browns were trailing by less than a touchdown for the first 3 quarters. In the fourth, the Bronco's pulled ahead to secure the win. 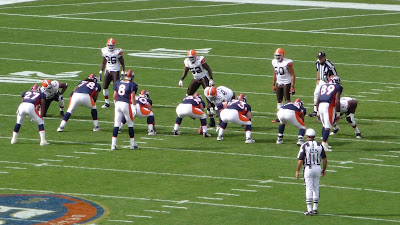 I wanted the Broncos to win or else I'll be leaving the stadium with 71,922 angry fans. Cleveland Browns 6 - Denver Broncos 27 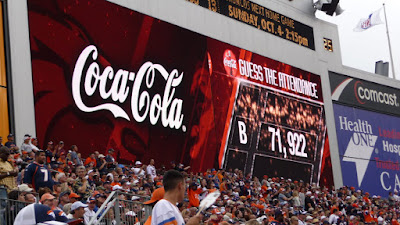 Now, some video for your enjoyment.

Thanks to GameDaily.com, I got the highly coveted key to download UNCHARTED 2: Among Thieves™ Multiplayer Beta. The game is a blast. The movements are responsive and fluid. For a 10 player game, the maps are just the right size. It's not too big, not too small. You can get from one end to the other in under 30 seconds. It took me over a minute to cross a map in Halo.

I like how they spiced up the matches by limiting what you can do. The first beta gave us Deathmatch and Plunder. Beta 2 introduced matches where you can only use pistols and snipers, have 1 life to live, or use RPG's only. There are also different modes for cooperative play. I tried it out by myself and didn't find it enjoyable. Maybe it will be different if my friends were on.
A note to all who play shooters with inverted, or flipped, controls. I performed horrible in the first few games because I only inverted my AIM view. I didn't realize there were two places to invert in the options, AIM and Look. I think this is the only game I have every played that had 2 forms of inversion.
One of the greatest features Halo introduced was the ability to view your stats on a website. Kudos to Naughty Dog for incorporating this into Uncharted. I can view the wins, loses, kill death ratio, etc. at www.naughtydog.com/stats/meatwad101010.

Finally, a PS3 game worth getting.
Posted by Meatwad at 10:09 AM No comments: 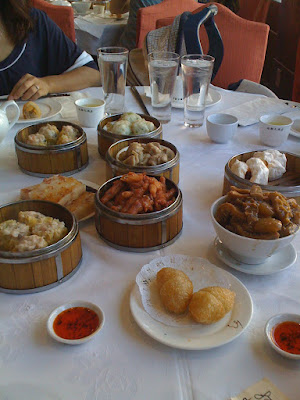 A week ago, I had lunch with friends at Jade Asian Restaurant in Flushing, N.Y. Their dim sum was delicious. We got there just before 11 AM and ate mostly breakfast dishes. As we were preparing to leave, I saw other foods I want to sample. I didn't know they bring out different dishes around noon.
'Till next time...
Posted by Meatwad at 10:09 AM No comments: 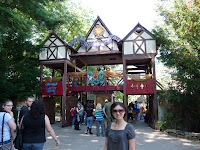 Lacey and I visited the Renaissance Faire in Sterling Forest by Tuxedo, NY. The weather was beautiful and crowds a plenty. This weekend's theme was Pirates and a lot of the patrons dressed the part. I told Lacey she'll see dorks from all walks of life. She thought I was being mean until she witnessed it herself. I have to hand it to those people; Their presence made the event more lively and humorous. 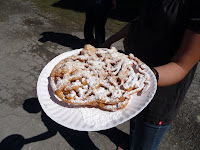 We didn't have breakfast so we shared a funnel cake. They made it extra crispy. I was never a fan of it until now. 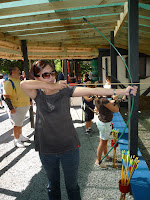 Playing archery in Wii Resort paid off. Lacey made a couple good shots. 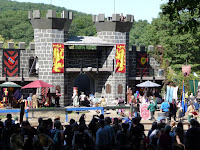 It took us roughly 30 minutes to purchase a turkey leg and an onion blossom. I forgot to take their pictures because jousting was about to start and we had to make our way to the tournament area.
We couldn't watch the joust in peace because there were wasps everywhere. I should have brought some insect repellent.
'Till Next Year! 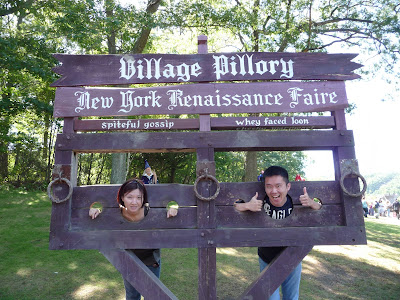 Some friends are visiting from Boston and brought along two pugs. The small one (left) is loud and hyper. The fat one (right) has stomach problems but makes a good lap dog. 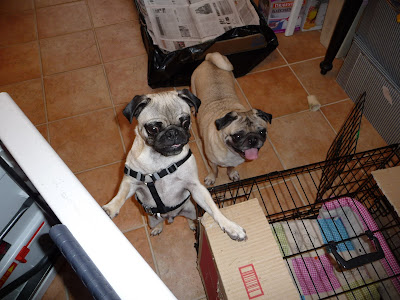 Enough playing with the dogs. For dinner, we enjoyed a hearty meal at a Korean restaurant in Palisades Park. Even though I'm full, I'm looking forward to dim sum in Flushing tomorrow. 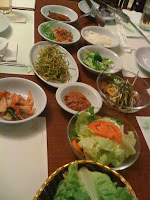 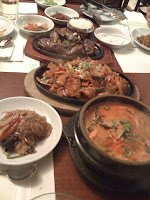 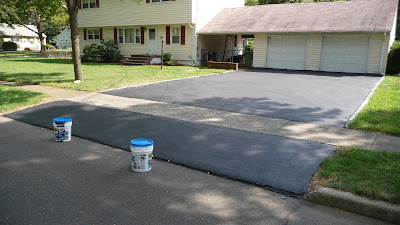 Finally, after weeks of rain we got a weekend of sunshine. I took the opportunity and patched the driveway. I'll apply the second coat when we get another sunny weekend.

What made this time different was that I sealed most of the major cracks and applied a primer on the oil stains. I'm very pleased with the result.
Posted by Meatwad at 10:08 AM No comments:

My girlfriend, her friends, and I visited a few wineries in Long Island, New York this past Sunday.

After a long drive, we stopped for lunch at Lobster Roll. I wasn't involved in the planning so I don't know why they picked this restaurant. The food was overpriced and sub-par. I guess the reviewer gave it good rating when compared with nearby restaurants?

We visited three Wineries, Martha Clara Vineyards, Lieb Cellars, and Macari Vineyards. I don't drink so I don't know if they were any good.

The highlight of my day was seeing the goats, pig, and turtle at Martha Clara. 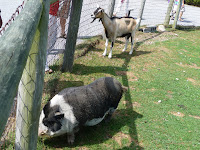 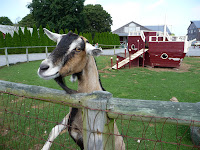 Meatwad
I am an obese man trapped inside a fat mans body.

A Window To The Past